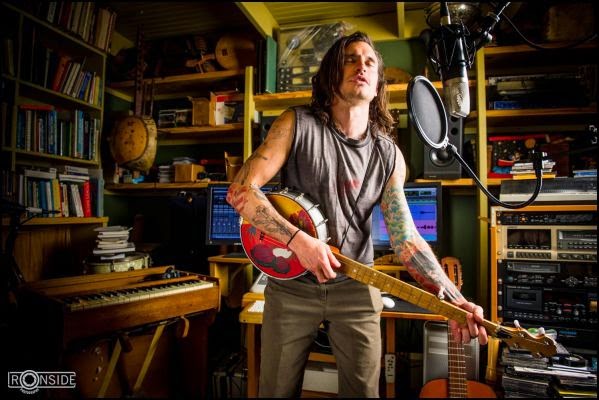 A news story headline from February 2013 that is part of our SOY display reads "VA: Suicides hit 22 per day."  That statistic just hit home in a terrible way when we learned that beloved Iraq Veterans Against the War member, singer-songwriter, bicycle activist, peacemaker Jacob David George, took his own life this week.  I remember meeting Jacob when he rolled into Austin by bicycle to attend the IVAW convention in July 2010.  His energy was contagious.  He crisscrossed the country on his bicycle to speak about his 3 army tours in Afghanistan and the moral injuries he sustained as a result.  His efforts to speak candidly about his pain and about his own views on the war were very meaningful for those who heard him speak and sing.

Jacob tried many kinds of treatment for his combat-related post-traumatic stress injuries.  He said that throwing his Army medals away during the IVAW protest at the NATO Summit in Chicago was one of the most healing actions that he had experienced.  He also returned to Afghanistan on a delegation with Voices for Creative Nonviolence to offer solidarity with the Afghan Peace Volunteers there.   The long term cure for war trauma is preventing war in the first place, and that was what Jacob was trying to do.  We mourn his death and the war that caused it.

Here are the lyrics to his song, "Support the Troops"

“we just Need to support the troops"

is what they tell me

well, this is from a troop
so listen carefully

what we Need is love

Now, it's true
The troops need support
the support to come home
they need treatment and jobs
and love for the soul

see,
war ain't no good
for the human condition
I lost a piece of who I was
on every single mission
and I'm tellin’ you,
don't thank me for what I've done

Jacob’s poem appeared in After Action Review, a collection of writings by vets published by Warrior Writers in 2011. He also transformed it into a song that he traveled around the country singing to the thumping strings of a banjo. With other vets, he did cross-country bicycle rides for peace. He liked to call himself “a bicycle ridin, banjo pickin, peace rambling hillbilly from Ouachita Mountains of Arkansas.”

A selection of Jacob George’s songs, from a collection called “Soldier’s Heart,” that he performed with a country band in Arkansas in 2013, was recorded in “Support Your Troops: A Special Report”:

Thanks to Jan Barry for posting these lyrics on his website

People here in Eureka Springs came to know and love Jacob. They are in shock. Could you tell me the name of the editor who posted this blog? I would like to use a quote from it in an article in the Eureka Springs Independent.