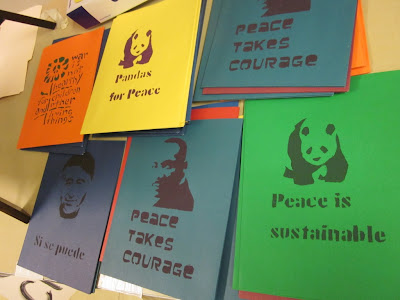 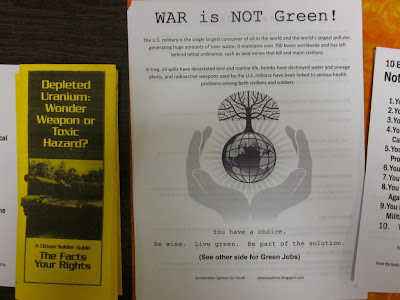 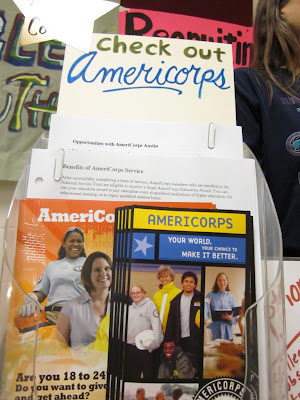 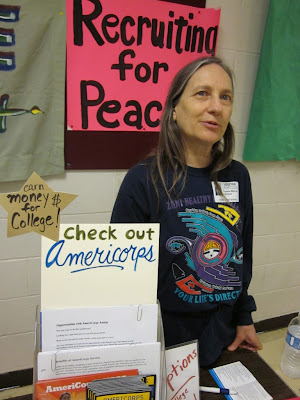 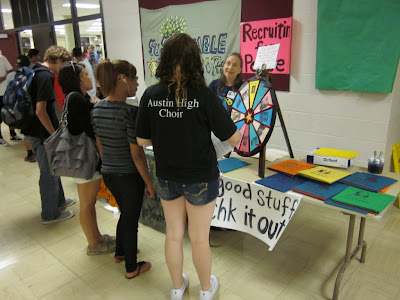 Today, Tami and I launched the Fall semester with our table at Austin HS, and it went well.  We had positive feedback from school staff members, and students stopped by to check out the peace wheel and materials.

Some readers have asked about who is on the peace wheel, so here is the list that we hand out to students.  Because a student last year suggested that we add events as well as people to the wheel, we did that, so here is what we have going.  We often switch out the people on the wheel, so we ask students for suggestions as we go.


Egypt’s popular uprising began with a mass rally on January 25, 2011 as hundreds of thousands of Egyptians gathered in public squares calling for governmental, economic and social change. The overwhelmingly nonviolent crowds faced violent suppression by their president, but they succeeded in ousting him from power and inspired other Middle East freedom movements happening right now.


Gidon (Gator) is an award-winning hip hop and spoken word artist in Austin who was president of his class at Reagan High School. He has been active with The Cipher and the Texas Youth Word Collective and the band, Public Offender, whose CD, Drop Jewels, is a call to men to stop violence against women. He teaches performance poetry at the Texas Empowerment Academy.


Wangari Maathai won the Nobel Peace Prize in 2004 for leading the Green Belt Movement in Kenya, a tree-planting effort undertaken mostly by women’s groups. Maathai earned a doctorate degree and has written and spoken extensively about conservation and human rights.


Martin Luther King, Jr. (1929 – 1968) is perhaps the best known of all US Civil Rights leaders. Following methods used by Gandhi and the freedom movement in India, King’s oratory, writings and personal example directed the movement in using nonviolent strategies such as mass marches, boycotts, sit-ins and direct negotiations in achieving equal rights.


John Lennon (1940 – 1980) was a member of the British rock band, The Beatles, and also had a successful solo career. He and his spouse, Yoko Ono were outspoken peace advocates who expressed their views through music and performance art.


Greensboro sit-in On Feb. 1, 1960, four black college students in Greensboro, North Carolina, sat down at a Woolworth’s lunch counter where they were refused service, but they did not leave, even when harassed. The next day, more students continued the protest, and the movement grew throughout the south (including Austin) with widespread sit-ins at segregated restaurants, department stores, movie theatres, swimming pools and churches.


Cesar Chavez (1927 – 1993) led worker strikes, boycotts and marches for higher wages and better working conditions for agricultural workers in the US, including South Texas. He and Dolores Huerta co-founded the United Farm Workers, led the successful California grape boycott and helped organize other labor organizations in Texas and the Midwest. A statue of Cesar Chavez stands on the UT campus.


Julia Butterfly Hill is a poet, speaker and environmental activist who lived for two years on a platform 18 stories high in a 1,000 year-old redwood tree in California as a protest against clear-cutting. Her book about that experience, The Legacy of Luna, was published in 2000.


Flobots is a rock/hip-hop band based in Denver. Lyrics of their release, Fight With Tools, promote nonviolent methods as the tools for social change.


Mohandas Gandhi (1869 – 1948) was one of the most influential nonviolent activists in history. He helped lead India to independence from British Colonial Rule and his nonviolent methods inspired MLK and others in the US Civil Rights Movement.


Helen Keller (1880 –1968) was the first deafblind person to graduate from college. She learned to speak and became a world traveler and author who was outspoken in her advocacy for peace, women’s voting rights and labor rights.
Posted by Editor at 3:29 PM